Quinta Avenida is one of the longest and certainly the most beautiful Boulevards in Havana & it was important to the developement of the Miramar district. In the year 1900, most of what we know as Miramar was farmland. It began to be developed in the first part of the 1900’s as a result of the migration of wealthy people from Havana at that time. The fountain that sits at the beginning of 5ta (built in 1924) was named ‘Fountain of the Americas’ after the original name of 5ta Avenida which was Avenida de Las Américas (Avenue of the Americas). Another notable site is the clock tower at 10th street built between 1921 and 1924. The bells were supposed to sound like London’s ‘Big Ben’ but since they don’t work, I’ve never heard them. The ‘Casa Verde’ (Green House) at 2nd and 5ta is also quite famous having many mysteries attached to it. Today it’s been converted into a museum. In 1921 a metal draw bridge was constructed that connected the Vedado district with Miramar crossing the Almendras River. It helped significantly with the expansion and 10 years later the road it connected to was named Quinta (5ta) Avenida. In 1953 the tunnel was built and that made it much easier by cutting travel time by a substantial amount. Today many of the houses along the strip of 5ta I’m referencing have been converted to government entities, commercial spaces and embassies. I have posted none of the photos (maybe 1 or 2) of the embassies, I will be doing that in a future post, ‘Embassy Row’.
Today Quinta Avenida extends from the tunnel coming from Vedado, all the way to around the town of Santa Fe just after Marina Hemingway where it becomes a highway (Carretera Panamericana) that goes to Mariel….at around Calle 284, approximately 10 kilometers in total. The part I have explored or made reference to in this post is between the tunnel, up to about Calle 92. I will explore further on in another post but it’s safe to say that most of the action lies within the area I show below. Up to around Calle 110 there’s a pedestrian walkway with manicured bushes and trees on either side of it running through the middle of 5ta starting from the fountain on Calle 2. I always see joggers, people walking their dogs, cycling or just hanging out in groups or alone on any one of the many benches placed along the walkway. Our house is right on 5ta, I often sit on the porch, smoke a cigar and watch the traffic, both vehicular and pedestrian, parade by. After the roundabout at Calle 112 the landscape changes dramatically, residential turns into commercial and the Coney Island Park appears on your right. I don’t go beyond the roundabout on this post, I will continue this route in the future.
A few points of interest are: The ‘Centro de Negocios Miramar’ (Miramar Trade Center) located between 76-80 & 5ta y 3ra. This outdoor mall was constructed between the late 1990’s & 2000’s and offers an array of services and entertainment venues. The Iglesia de Jesus de Miramar built between 1945-53 at Calle 82, the Santuario Nacional de San Antonio de Padua built in 1949 at Calle 60 (which I’ve always found closed) and the Iglesia Catolica Santa Rita de Casia at Calle 26 that was built in 1950, all 3 of these churches are found along this strip of 5ta. The Parque Miramar with it’s statue of Amiliano Zapata is a beautiful refuge with benches and shade trees on either side of 5ta between Calle 24/26. There are also several Cigar Shops on and near 5ta: the 5ta y 16 LCDH, the Hotel Comodoro Cigar shop on 3 y 84, the Hotel Melia Habana LCDH on 3 y 76/80, the Hotel Palco LCDH just off the roundabout at 5ta y 146, the Club Havana LCDH on 5ta y 188/192 and finally the Marina Hemingway LCDH near the end of 5ta Avenida. A few (many) restaurants and bars have opened up on or around 5ta (I’ll talk about these in another post) as well as many Casa Particulares. Something to note, there are very few left turns allowed on 5ta and you must maintain a minimum speed of 60 kph (max.80 kph) with no stopping at anytime. Cameras are set up all along 5ta and if by some chance you stop, the police will be there in minutes. 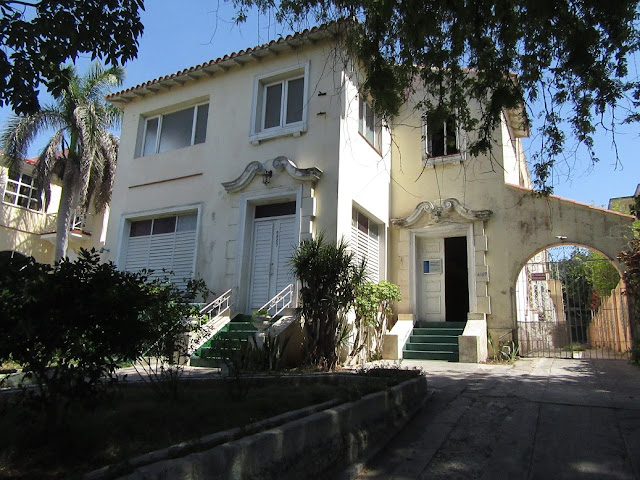 Pedestrian walkway down the center of Quinta Avenida How to smoke a cigar